Do Not Be Deceived

The word of God is sharp
and is able to discern.
And when you plug into its power,
it should change you, reprove what you did learn.

Deliverance comes from sorrow,
Of past failures and our wrongs.
It cannot be without repentance,
No matter how you cry and long.

For Esau sought with tears,
after believing to get something new,
And traded  away his birthright
In return for a simple bowl of stew!

Beware of no conviction,
As you sit with your crowd,
God has so much more to say;
His Voice so soft, yet booming loud.

What is Teshuvah? It is a set time, a mo’ed, a season, a holy convocation. Teshuvah is a kairos, leading up a propitious moment for decision or action. This is a set time to prepare our hearts for meeting our King. The Greek word kairos, literally means opportunity. It is a time to experience God. It is His appointed time to reveal His purposes in His plan. However the key to this opportunity is repentance. 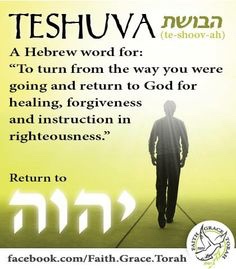 God could not identify Himself as an, all merciful, gracious, and slow to anger God, if He attempted to trick us or set us up. If God were looking to catch us off guard He would strike the moment we sinned or messed up. Isn’t it interesting how God woo’s us in and draws us into truth and repentance?

Genesis 8:22 While the earth remains, seedtime and harvest, and cold and heat, summer and winter, and day and night shall not cease. Just as seasons are put of God’s roadmap, Kingdom principles will remain intact as long as we are on this earth.

In Proverbs chapter 4 we are instructed to find wisdom. However it goes on to tell us that finding wisdom is not where we stop. No, when we find wisdom that is a road sign or a message that there is more and for us to look for more. We are instructed through Solomon’s teaching to discover and learn what to do with wisdom. This book goes on to say get wisdom and forget it NOT. Read Proverbs 4

2 Timothy 3:16-17, the apostle Paul declares to us that all scripture is God-breathed, and given by inspiration of God and it is profitable for doctrine, for reproof, for correction, for instruction in righteousness. Teshuvah isn’t Old Testament it is ‘The Covenant’ entrance back into the will of God for our life and the plans He has for us. 17) That the man or woman of God may be perfect, thoroughly equipped for every good work. We cannot be carrying around fear, doubt, guilt, shame, unworthiness and think we can be equipped to do much more than survive. No we must repent and receives God’s forgiveness in Christ to be called perfect.

The New Testament wasn’t written when the apostle Paul was instructing Timothy. The New Testament was being written as it was being lived out. The apostle Paul was given the mysteries of Christ and the church, seeing and understanding and then teaching what was written in the Scriptures. How from the beginning this was the fulfillment of the Church in our Messiah, Jesus Christ. Do you know what Jesus preached first?

We see Jesus attending the festivals during His time on earth. He has fulfilled the first 4 feasts and will fulfill the 3 remaining feasts.

Jesus began His ministry preaching…………………Repent for the kingdom of God is at hand. It begins with repentance to God.

Luke 15: 17-21- our Lord Jesus telling the parable of the prodigal son in Luke chapter 15, clearly shows us what true return and repentance is to look like. To turn back and shoov, or return and do Teshuvah, is to see where you are, then come to your senses, admit to yourself and then take words (confession) and return to our Father. This is how we Teshuvah.

We realize our sins have been against heaven and The Father and not just random people. We realize we have been ‘self’ centered not God centered.

Then we can say to the Father; I have sinned against heaven and against You, this is Teshuvah. We are turning, RE turning to our true nature. We were created in the image and likeness of God!

We know the rest of the story. There was a huge celebration and the son was given the garments of salvation. He was given the best robe, the signet ring and shoes for his feet. This scripture is talking about gentiles who are recognized and come back home.

In the bible when one of God’s people dies, it says we sleep, but when we are out of fellowship and break covenant with The Father the bible says we are dead. Oh the word of God calls this death.

I like the story of the prodigal because we know prior to the demanding his inheritance and leaving the father, he was his son. However when the relationship was severed by the son, the father states emphatically that his son was dead.

When the son takes words and returns to repent, the father says, for this my son was dead but now he is alive again; he was lost but now he is found. We see by reading this parable that the son was a son already who had been alive, and now after repenting to the father, he is alive again. He is now restored into right relationship with his father. And they were merry.

No matter how far off you are, or have been, it is never too late to come to your senses. Maybe you’re not lost or dead but longing for a deeper more intimate relation with God through Jesus and Holy Spirit. If you are feeling this draw it is because while you have been off The Father never quit looking for you and you can feel His gaze.

He said to himself. I will arise and go to my father and I will say unto him, Father I have sinned against heaven and before thee, and am no more worthy to be called thy son; make me as one of thy hired servants.

The King is in the Field

Turn your eyes upon Jesus,

Look full at His wonderful face

And the things of earth with grow strangely dim

In the light of His glory and grace.

Heavenly Father, I have come to my senses and I am coming back home. I want to return home. Today I can feel You running toward me, to greet me in the field. I know I have been just like the prodigal, using words like, give me, and asking questions like, why are You withholding from me?  Today I am asking and I am saying, make me a servant, knowing that this is how to become a true son or daughter. Oh God, I am sorry for ever leaving and blaming you for the hurts in my life. I know You are a good, good Father, and I want to return and be in right relationship with You. Amen

PS (If you are tempted to decorate someone’s pigpen I strongly advice against it. The pigpen is where the father allowed the son to land. It is what woke him up to his poor choices. Do not throw additional finances,  free food, a cell phone, etc. at disobedience. This would be enabling and will hinder the work of God in their life. Prayer that God will bring them to their good senses).